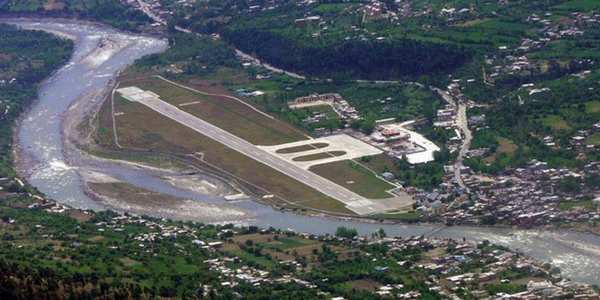 The nearest airport to Manali is Bhuntar Airport, located at a distance of 50km from Manali and 10km from Kullu. Air India operates a flight from Delhi to Kullu, however, services are irregular and prices very high. You can hire a taxi to go to Manali from the airport or you can go to Kullu and take a bus which operates frequently on this route.

Manali is a beautiful Hill station located in the Himachal Pradesh state. Throughout the year thousands of tourist not only from India but from foreign countries come to Manali to enjoy the beautiful weather and scenaries. The distance from Delhi to Manali is about 540 KM and it takes more than 12h to reach Manali by road from Delhi. So to reach Manali from major cities like Delhi and Chandigarh, Air travel is the best and quickest option. The Airport which serves tourist for Manali is Kullu Airport which is also known as Bhuntar Airport. Bhuntar Airport is located a distance of about 50 KM from Manali main city and 10 KM from Kullu city.

The IATA Code for Kullu Manali Airport is KUU.

Because Manali and Kullu are surrounded by high mountain peaks, so Bhuntar Airport is known as one of dangerous Airports of India. Due to this, flights operation is a very challenging task at Kullu-Manali Aiport.

Although Bhuntar airport doesn’t remains active throughout the year due to bad weather conditions around Kullu and Manali, but during seasons the aiport remains busy as the tourists finds it the fast medium of reaching to Manali. Air India flights are available from Bhuntar Airport for some of the major cities of India like Chandigarh, Mumbai, Shimla etc.

As Kullu-Manali Airport is situated on the banks of Beas river, so to increase the length of runway initially a plan was made to turn the flow of river and creating a bridge. But later IIT presented a report according to which there is no need to turn the river, instead they have proposed to bent some part of the runway.

In addtion to this, passengers can avail many more facilites at Bhuntar Airport, like.

How to Reach Bhuntar Airport

By Bus or Taxi: Himachal Roadway buses and private taxis are easily available from various locations to reach Bhuntar Aiport at any time.