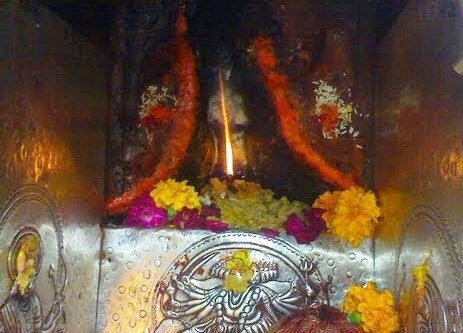 Here we are going to give information about these 5 Shakti Peeths of Himachal.

Located at an altitude of 940 meters in the Sola Singhi range of hills, Chintpurni Temple is one of the 5 Shakti Peeths that are in the Himachal Pradesh. This temple is about 33 KM from UNA main city and about 3 KM from Bharwain village. Mata Chintpurni Temple is a place of worship for people from all over India. Although Pillgrims come here throughout the years for worship and seek blessings of the Goddess, but during Navratras there is huge rush.

According to believes of Hindus, Mata Sati feet fell here which is present in the form of ‘Pindi’ and is worshiped.

Chintpurni means removal of worries and tensions, so there is strong believe that, the ‘Mata Chintpurni’ removes all worries of people who come to this temple.

Chintpurni Temple was built by Pandit Mai Das. It is said that, one night Goddess came into his dream and asked him to built her temple. As being a firm devottee of ‘Mata’; Mai Das created temple in Chhaproh village, which later became ‘Mata Chintpurni Temple’

Mata Chintpurni Temple is open for pillgrims throughout the year and the main timings of temple are 4 AM to 11 PM.

During Navratris in March-April and September-October, two big fairs are held Mata Chintpurni Temple. At this time long queues of visitors are there. A third fair also held at this temple in the July-August month.

People from all over India come in this temple throughout the year to Worship Devi Chamunda, which is present here in idol form covered with Red Clothes.

Chamunda Devi Temple is about 24 KM from Kangra main city. The history of this temple is 400 years old. The temple was built in 16th centuary. It is said that, an ancient idol of Chamunda devi was found by a Priest and a King when they were digging the temple in the intention of shifting it. After finding the Devi’s idol they changed their mind and made a big temple by establishing the Idol there itself without shifting it.

According to believes of Hindus, Devi Durga took the Avatar of Chamunda Devi to kill demons ‘Chanda’ and ‘Munda’. Thats why this Avatar of Devi Durga is named as Chamunda.

The Chamunda Devi temple is surrounded by lush green mountains and beautiful scenaries. There is a large pond in the temple premises where Pilgrims take holy bath.

Located about 16 KM from Nagarkot area of Kangra district, Himachal Pradesh, Brajeshwari Devi Temple is one of most visited sacred places in north India. This temple is one of the 51 Shakti Peeths and is the main attraction of Himchal Pradesh.

The Goddess in this temple is known as Brajeshwari Devi, Vajreshwari Devi or Vajra Devi. The meaning of Goddess name is Goddess of Light of thunder. It is said that Brajeshwari Devi is an ‘Avatar’ of Maa Parvati. According to Indian mythology, when Lord Shiva was carrying body of Maa Parvati, then her left breast fell in this place which later became the sacred place.

History of this temple says, Mughal attackers attacked this place many times and tried to destroy it. In 1905 a severe earth-quake caused too much damage to the temple. The temple was reconstructed in 1920 to its existing form.

Brajeshwari Devi is situated in the temple in the form of ‘Pindi’. Local citizens worship the Goddess as their Kuldevi(family deity). In Brajeshwari Devi temple there is also a small temple of ‘Baba Bhairo’.

Brajeshwari Devi is the main identity of Kangra distt. and is also known as the Gateway of Kangra.

Brajeshwari Devi is a place where not only Hindu Pilgrims come to worship, but other religions people also come to pay Homage. There are three Domes in this temple which represents three religions, first Dome is the symbol of Hindu religion, 2nd represents Muslim and third represents Sikhism.

For almost 200 years Scientists and Archaeologists are trying to find the mystery behind the continuosly burning flame of Maa Jwala Ji Temple which is one of the Shakti Peeths and is located about 32 KM from Kangra District of Himachal Pradesh.

When you enter this temple, you will feel that this is a real miracle as flames continue to burn here 24 hours without any oil or wick.

You will be surprised to see that, there is no idol in the temple which is worshiped. But there are flames which are worshiped here and are present in the form of Goddess Jwala Ji.

There are total of 11 Flames in the temple which all burns continuously without any flaming material or wick.

The main flame is about 3 feet under the ground. The Jwalaji temple is a real proof that God has different forms and in this temple God is present in the form of Flames.

It is believed that the when Lord Shiva was carrying the body of Maa Sati, then her tongue fell here. It is also said that this flame is the mouth of Maa Jwala which means ‘Mukh’ in Hindi. Thats why it is also known as Jwala Mukhi temple.

Pilgrims come in the Jwala Ji temple throughout the day. When ‘Holy Water’ (Charanamrit) is given to Pilgrims, then flame is seen in this Holy Water which is really amazing. One would think that the water will be hot, but the real surprise is that it is totally cool.

Hindus believe that once their was a Frightful battle between Deities and Devils, in which Deities lost. After this battle, the deities combined their power, as a result of which a flame emerged which is present in this temple as Maa Jwala Ji.

There is a pond in the premises of temple which is known as ‘Gorakh Tibbi’. The water of pond appears to be hot, but when you will put hand in the pond, they you will be shocked to see that, the water is totally normal.

Mughal King Akbar tried to destroy this temple many times. He turned the flow of river towards temple, but was not successful in his attempt to cause any harm to it. After failing in his attempt, he became devotee of Maa Jwala and presented a Gold Crown.