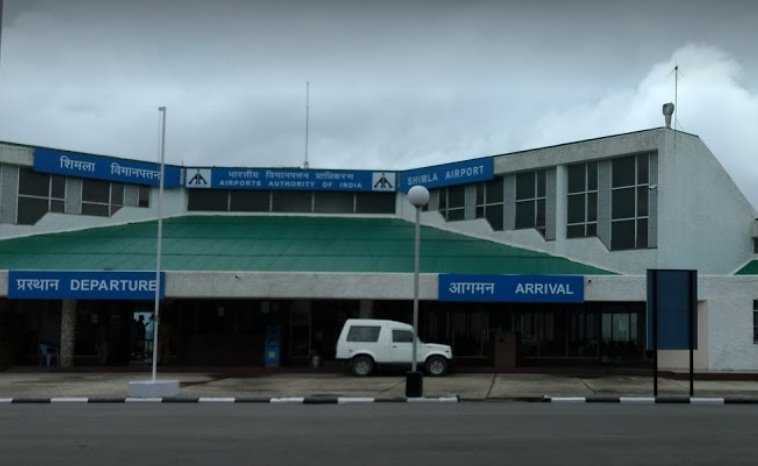 Shimla Airport is very less used for Commercial and scheduled flights. The reason being it remains inactive for about half year due to weather conditions around Shimla.

Shimla Airport was constructed by crushing a mountain in Jubbarhatti region and then leveling it with sand and concrete. The Airport has a small runway of just 1230 meters that’s why it is suited only for small charter planes and average flights.

There is only one terminal at Shimla Airport and that too is small to handle just 50 passenger for arrival and 40 passengers of departure flights. Because Shimla has very high altitude so there is load restrictions on flights departing from this Airport and can carry less number of passengers as compared to while arriving flight. The parking area of Shimla Airport can accommodate only two average planes at one time.

Flight have been suspended for operation from Shimla Airport many times. In 2012, due to soil erosion, runway of the airport started shrinking, as a result of which the flights were suspended from the airport for few years. In 2015 the non scheduled i.e chartered and private plane services were re-started from the Shimla Airport.

The commercial and scheduled flight started their operations again to and from Shimla Airport in 2017. Air India is currently the only Airline providing services from this airport. Shimla Airport has only Domestic flight and there are no international flights from here.

The main cities and Airports that are connected to Shimla Airport are Delhi, Chandigarh, Kolkata, Lucknow and Amritsar. There are direct flights from Shimla Airport to these cities. Other cities can be reached through connecting flights by many other Airlines like Air India, IndiGo, Go Air, Vistara, Spicejet.

As mentioned above there is only one Terminal at Shimla Airport i.e. Terminal 1. This terminal is used only for Domestic flights. Since there are not frequent scheduled and commercial flights from this Airport so it is mostly used by private Airlines for chartered flights and for Military training purposes.

Scanners & security:
Passengers and baggage’s are scanned properly at the Shimla Airport for the security purposes.

Food & Shopping:
Lot of eating and shopping places are there around Shimla Airport where passengers can buy eatables and purchase other things.

How to Reach Shimla Airport:

To reach Shimla Airport from the city center, taxis are the best and easiest way. Other than the taxis there are two ways of connectivity to Shimla Airport i.e By Bus or By Train

The nearest bus stand to Shimla Airport is Jubarhatti bus stand which at a distance of about 17 KM from the Airport. Private taxis are easily available from Bus stand to reach Airport and vice versa.

Shimla Airport to Mall Road:
The famous Mall road of Shimla is about 21.4 from the Airport and tourists can easily reach there by taxis.

Shimla airport contact number:
The Shimla Airport staff can be contacted at this land line number for any questions: 0177 273 6835